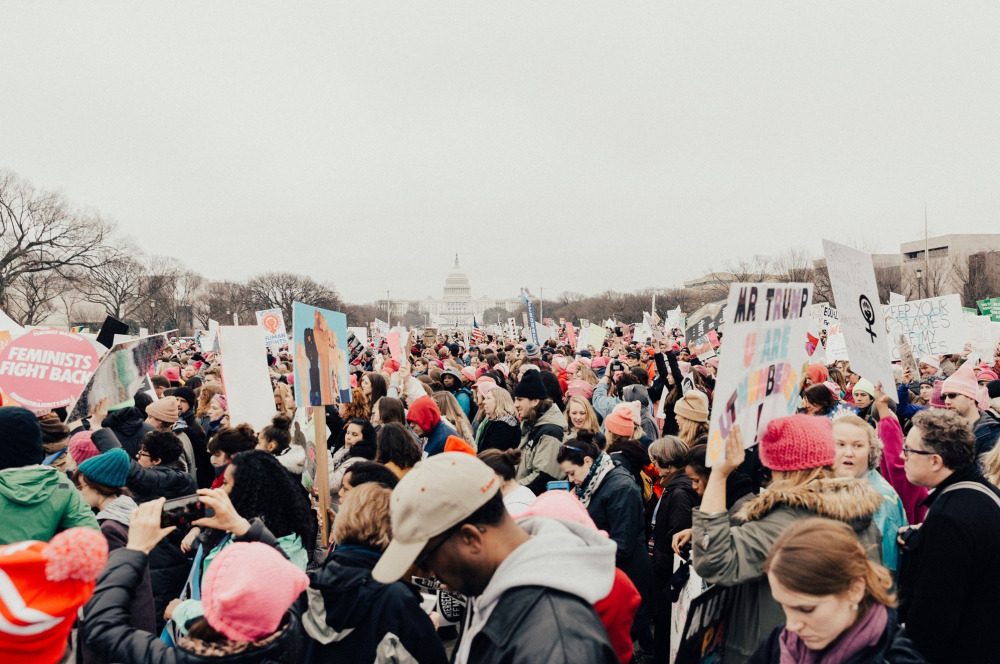 While there seems to be a rising tide of women’s empowerment from the Me Too and Times Up movements, there is also seems to be a backlash against feminism. The backsplash mainly stems from a misunderstanding of what feminism is and people who equate feminism with things it’s not.

To help clarify feminism and support the women’s movement are organizations like the Feminist Majority Foundation (FMF). They report about, and support causes important for women around the world.

The dictionary definition of feminism is “the advocacy of women’s rights on the basis of the equality of the sexes.” However, some feminist organizations, like the FMF, go further and define feminism as “the policy, practice or advocacy of political, economic, and social equality for women.”

So, if you want to know what is feminist, it is the belief that women should be paid equal to what men are for the same work. It is also a belief that women have a right to make their own medical decisions regarding caring a pregnancy to term, and not to be violently attacked.

However, many people who see feminism as a threat to society have portrayed feminists as man-haters and murderers mainly due to their abortion advocacy. These tactics have been moderately successful because some young people proclaim not to be feminists even though they may agree with certain feminist ideals.

Although women’s rights have made many advances in the past 40 years or so, many of the same fights require feminist groups to work to keep those rights. The feminist logo tries to portray the fight for these freedoms by depicting a raised fist in the center of the Venus Symbol, which is the universal sex symbol sign for females.

There are several ways that the FMF promotes feminism and feminist ideals. They self-identify as a group that works toward women’s equality, reproductive health issues, and they advocate for non-violence. They use their resources and promote actions to empower feminists.

The projects in Afghanistan involve organizing the community, educating the public, policy research and strategies, and supporting women’s organizations in Afghanistan. They want to empower more women, so they can take leadership roles as the government is reorganized.

The FMF is involved with the women’s movement in Iran and raising public awareness outside of the country on what is going on there. The movement is trying to change laws, so women face less discriminatory practices regarding:

Some changes have already taken place, such as inheritance laws that make it easier for women to inherit property after their husbands die and in receiving equal compensation from insurance companies if they’ve been injured in automobile accidents.

The FMF also work on initiatives to eliminate violence against women and children, including:

Along with making more people aware of these problems, the Feminist Majority Foundation also works to increase funding for programs regarding reproductive health. They not only work on these projects on their own, but they are a part of a coalition to get the US back in a leadership position on global reproductive issues.

Advocacy in the US

The FMF works on a range of women’s issues in the US, including abortion rights, access to birth control, gender equality in sports, and mifepristone and cancer research.

Along with their work to preserve a woman’s right to choose, they are also trying to identify pregnancy centers which are not what they appear to be. These centers advertise themselves as real clinics and offer free pregnancy tests to women.

They also compile information about abortion clinic violence and harassment in the US that prevents women from gaining access to clinics. The information includes incidents of harassment or violence against clinics, patients, doctors, nurses, and clinic staff and volunteers.

This information has been compiled since 1993, and they release a report every two to four years. Along with statistics, the reports tell about police responses to violence and threats and provides an executive summary regarding the information they’ve gathered.

The Arlington advocate group is working to make sure women have access to affordable birth control, including emergency contraception. The cost of birth control increased sharply after an act to reduce the national deficit was introduced in 2005.

That act had a provision in it that prohibited pharmaceutical companies from selling contraceptives to college clinics and those serving low-income women. What was once $5 to $10 per month increased to as much $30 to $50 each month in most of those health clinics.

The FMF is also working to get FDA approval for an over-the-counter emergency contraceptive, which is called Plan B. They are also trying to let women know about the availability of this drug and how safe it is to use.

Another drug they have been instrumental in advocating for is RU-486, which is an anti-hormone pill that provides a safe way for women to have early medical abortions. They were able to get approval from the US Food and Drug Administration for clinical trials for this drug, mifepristone, as a treatment for cancers and other conditions that threaten the lives of women.

The second phase of trials has been launched to study the drug’s effects on ovarian and uterine cancers. The foundation was able to assemble a team of clinical researchers, lawyers, and FDA specialists to help with research using this drug for cancer treatments.

Along with women’s reproductive rights and health issues, the FMF also works to raise awareness regarding other feminist issues. They work to raise awareness about violence against women and were successful in getting the Federal Bureau of Investigation to change its definition of rape.

They also try to get police departments across the country to end their backlog of rape kits so that rapists can be brought to justice. They advocate for the end of sweatshop practices, where women are 90% of the workers, and for gender equality in sports.

They encourage people to join their efforts by writing their representatives on the federal and state levels to protect a woman’s right to choose, to end sex discrimination, to advocate for climate change legislation, and to support women in other countries who are being mistreated by their governments.

Along with writing and making phone calls to their government representatives, they also host events for women. These may include awards for women who have championed women’s rights or conferences to encourage young women to become activists on their college campuses and leaders in the women’s movement.

The website for the foundation also features a career center that helps women find jobs in various fields. Many positions include advocacy roles with organizations that help women, such as rape crisis centers or for other abortion rights groups.

However, they also advertise jobs that recruit women in fields like law enforcement, civil engineering, union offices, or in executive roles in other organizations. In addition to other companies or organizations, there may be Feminist Majority Foundation jobs listed as well.

Many of the openings at the FMF, their Feminist Majority sister organization, and MS magazine, which is their non-profit publication, are internships for college students. They usually have intern positions open throughout the year at their East and West coast offices for which interested parties can apply.

Their career area also lists international positions within the organization and temporary, freelance, and fellowships with other organizations as well.

Whether you understand feminism and the work of organizations like the Feminist Majority Foundation or are becoming acquainted with it, you can research their website to learn more about their activities and their advocacy to help women around the globe receive fair treatment in their communities, prevent discriminatory practices and get fair treatment from their governments.